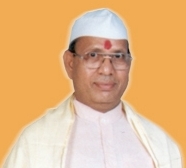 World Renowned Jyotish Pundit Ramanand Shastri comes from a traditional family of Jyotish Pundits dating back over 1200 years. Pundit Shastri is the 41st generation of Jyotishis in his family.  With over 45 years of experience, Pundit Shastri has helped tens of thousands of people in over 55 countries with Jyotish readings and Yagya and gemstone recommendations.

Ken Krumpe was first introduced to Vedic Astrology at the First International Course on Vedic Science in New Delhi, India in 1980 and has been studying and teaching Vedic Astrology ever since.  Ken was a full time PhD student in Vedic Astrology in India for six months in 1985 at Maharishi Ved Vigyan Vishwa Vidya Peeth.  Over the years Ken has studied with many top Jyotishis and experts in Vedic Science.

Ken has taught over 1000 courses in Vedic Science including Vedic Astrology, Gandharva-Ved music, meditation, yoga and Sidhis, Ayurveda and Science of Creative Intelligence.

Ken and Pundit Shastri are members of the Board of Directors of Enlightened Living Enterprises Charitable Corporation and coordinate a Yagya and Vedic Astrology program with over 350 Yagya pundits.

Leslie-Cam has 27 years of success

Reclaiming your Life and your Health

Our bodies are a sacred gift

Why Do Bad Things Happen To Good People?

We believe in the power of YOU. Elevated Radio partners with thought leaders, industry experts, movers, shakers, and makers! Get involved today!